Edit
watch 01:40
The Sandman Will Keep You Awake - The Loop
Do you like this video?
Play Sound

The force operates in East Anglia, including the county of Suffolk and the fictional coastal town of East Lee where the series is set. 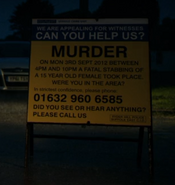 Appeal sign in which it is referred to as Ryder Hill Police.